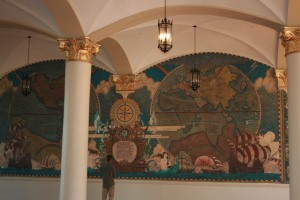 The video shows many photos of the New World mural‘s making before it was hung in Miami’s Freedom Tower in 1988. The mural depicts Juan Ponce De Leon and the Tequesta Chief, spanish galleons,mermaids and the new known world. The mural celebrates the date 1513 and Miami as the first discovered settlement by the Spanish explorers. 2013 is Florida’s 500th Anniversary of this historic. You are invited to watch the video and read further on the website. Many residents of Miami Dade County are waiting to see how the MDC, National Landmark Freedom Tower’s  New World 1513 Mural will be presented as a main celebrative art work for the Florida Quincentennial Anniversary in 2013. Some of the artists are still based in South Florida and they are still working towards bringing awareness about this important historic date for our South Florida community, State and Nation too.

The Freedom Tower is open to the Public and it is free to visit the mural that hangs in the main hall. Enquires for the artists can be made through the website or  786 239 0126 to leave a message.